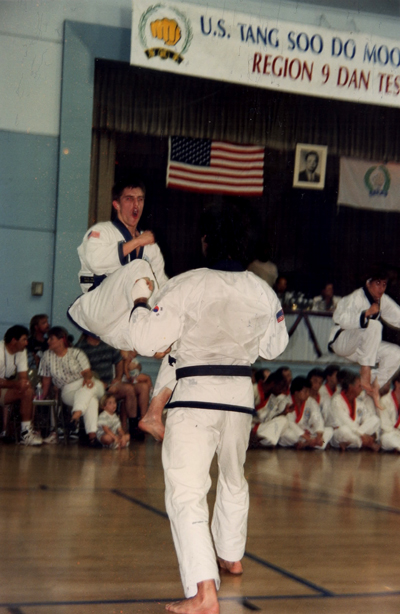 A Korean martial art emerging shortly after the Japanese occupation of Korea in 1945. It is similar to Japanese Karate employing many of the same striking techniques and strategies. A number of the forms found in Tang Soo Do are identical to the forms found within Karate. The martial art is often described as a Korean version of Karate. However there are differences in the application of the hip for the use of generating power in kicking and striking as well as a number of forms developed by Tang Soo Do’s founder Hwang Kee based on his research of ancient martial arts textbooks and the training he had done in China in 1936 under Master Yang Kuk Jin.[1]  Traditional Tang Soo Do training includes learning and practice of Stance, Posture, Breathing, Forms, Hand and Foot Strikes, Punching, Kicking, Blocking, Basic Sweeps and Joint Locks.

While Tang Soo Do and many other traditional martial arts have been discarded by several fractions of the martial arts community as being outdated and ineffective in combat. In recent years there have been a number of very successful professional mixed martial arts fighters with backgrounds steeped in traditional styles of of Karate in it’s various forms. Here’s a quick list of some of these martial artists.

Although many of these martial artists have trained in an incorporated a number of techniques from sport style martial arts into their game you can still see numerous elements of their traditional karate training emerge in their fights.