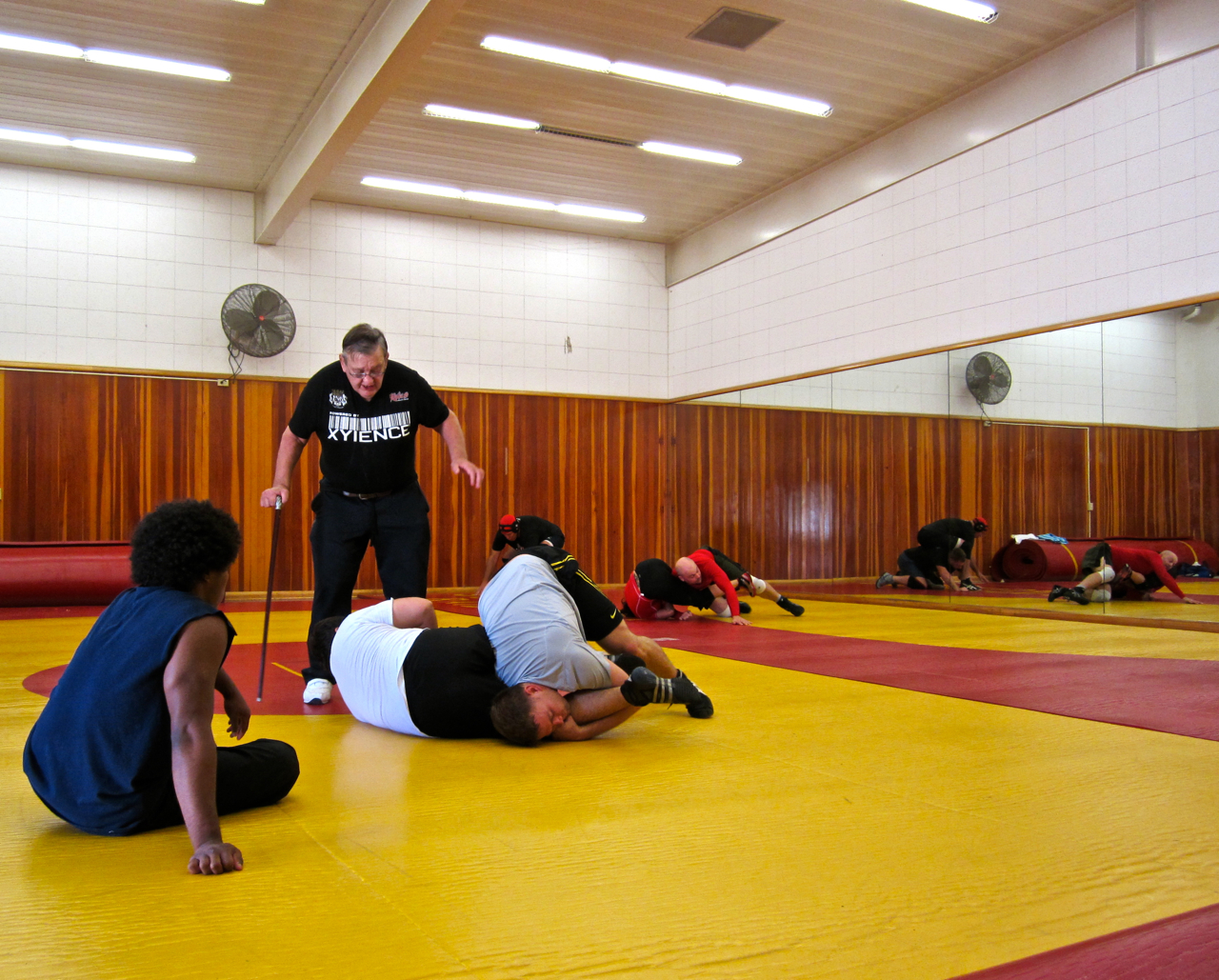 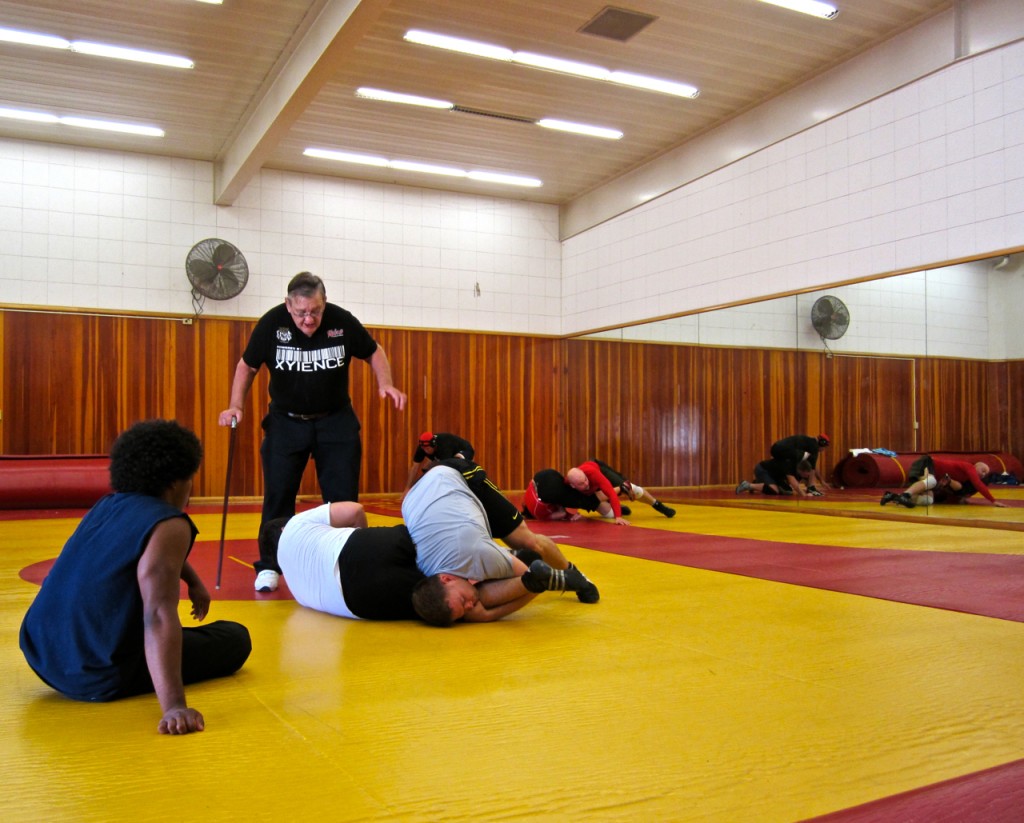 I just finished the final Catch Wrestling Camp of the year will Billy Robinson this past Saturday and Sunday. Similar to every camp, I was given a vast amount of new material to work on along with a lot of corrections to make in my wrestling.

I am often asked about what some of the common differences between Catch Wrestling and other Grappling styles are. Can you describe how some of the techniques are different from what you would learn in Judo, in Amateur Wrestling or Brazilian Jiu-Jitsu? Having a Black Belt in Brazilian Jiu-Jitsu and having wrestled in High School here is my list of 9 very unique grappling aspects found in Catch Wrestling. Keep in mind I could list many more and if you’d like feel free to leave comments and we can discuss them.

1. The Pivot. The pivot is one of the most unique aspects to this style of wrestling. It’s similar to the back step, found in amateur wrestling or judo, but far more efficient and utilized throughout the entire grappling system. Once mastered, the pivot makes even very difficult throws easy and common fundamental take-downs more efficient. Not only is the pivot effective in improving your stand up wrestling, but once understood you will learn many ways to pivot while on the ground as well.

2. Economy. Wrestling today has become a complete power sport with shorter and shorter time limits speed and explosiveness have become the game. Catch Wrestling is focused on economy of movement, technical superiority, and using weight and leverage to ones greatest advantage. Unlike collegiate wrestling, which has its origins in Catch Wrestling, a match only lasts 7 minutes and is broken down into three even shorter periods. These matches are won most often by points and because of the small amount of time, explosiveness often takes the place of economical technique and strategy. A Catch Wrestler trains to wrestle for as long as necessary to win, with either a pin or a submission. This type of match requires a far different strategy that emphasizes patience and economy over power.

3. A strong emphasis on Stand-up Wrestling. The single and double leg take-downs have become the staple of modern day Amateur Wrestling. Both these take downs are explosive in nature, power based, and rarely used in the old days when it wasn’t uncommon for a wrestling match to last several hours. Catch Wrestling emphasizes Stand-Up Wrestling, working from the clinch, from hand fighting, arm-drags, over-hooks, under-hooks, and neck ties are taught. The stand up wrestling is used to secure throws, hip tosses, hanks and hip hikes, saltos, suplexes, and even many standing submissions.

4. Stance. The stance used in Catch as Catch Can is not the low crouching stance with the head forward common in wrestling rooms across the country. The stance of Catch Wrestling more closely resembles the upright wedge stance found in the Greco Roman style. The head needs to be up and behind the front foot and knee. The feet need to be under the hips.  A proper stance allows one to wrestle well from the clinch and from standing up. This stance allows one to stay in balance, move easier, keep the head out of trouble, and it also translates better to mixed martial arts and self defense situations.

The Suplex and Salto are two very devastating throws. Both secured off of stand up wrestling, and both, if done on a hard surface, could be detrimental to the opponent. Additionally, because they are both high amplitude throws, they are often feared and not instructed in most wrestling programs.

6. The Double Wrist Lock. A similar version of this submission is found in nearly every style of grappling across the planet, but few people realize that Catch Wrestling has its own unique approach to this technique. There is a distinct finishing position for the Double Wrist Lock used in Catch Wrestling that is different from any other grappling style. One of the most amazing things I learned when helping with Billy Robinson’s Double Wrist Lock DVD, was the vast number of techniques that put you right into the same finishing position over and over again.

7. Defensive Strategy. The Defensive position in Wrestling is on all fours. There is a low defensive position and a high defense. The purpose is to stand up, switch, roll or submit the opponent from this position. It is a position less commonly used in submission grappling today due to the popularity of the guard.

8. The Pin. Under Catch Wrestling rules a match is won by submission or pin. Because a pin would result in a loss, the Catch Wrestler does not want to be pinned and will work to stay off their back and get to the feet. There are many submissions that can be gained when an opponent is working to avoid the pin. This is an entire area of grappling that could very easily go extinct if not learned by newer generations of grapplers. Today, the landscape is different because of the popularity of the guard position in Brazilian Jiu-Jitsu.

9. Pain. Catch Wrestling uses neck cranks, face locks, shin locks, reaping the legs, and many more very painful and dangerous techniques not found in Brazilian Jiu-Jitsu. The common miss-perception is to label these techniques as “dirty” based upon strength and power. This is actually far from the truth. They are all based upon the principles of leverage and body mechanics, and they are dangerous and cause pain because they exploit the weakest points of the body.

Most of these technique are illegal in sport grappling and therefore rarely practiced or taught correctly. Done incorrectly, these techniques may not work and will become even more dangerous as people often begin to use strength and power in an attempt to make a failing technique applied improperly to work.

P.S. If you are in the San Diego area and would like to learn pure and authentic Catch Wrestling I am one of only 7 assistant coaches to be recognized by Billy Robinson and Scientific Wrestling. To learn more about my program and how you can sign up contact me here.