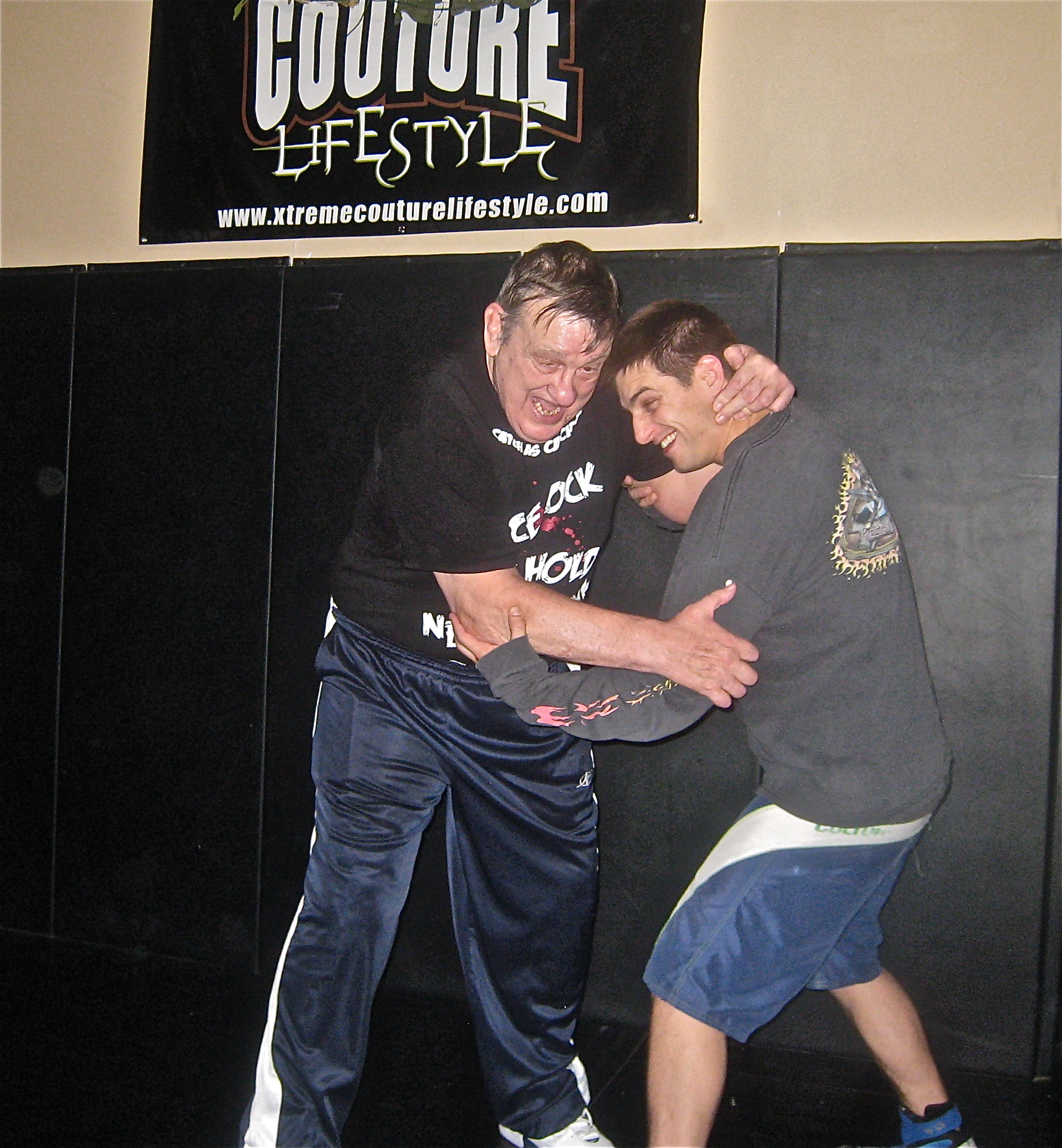 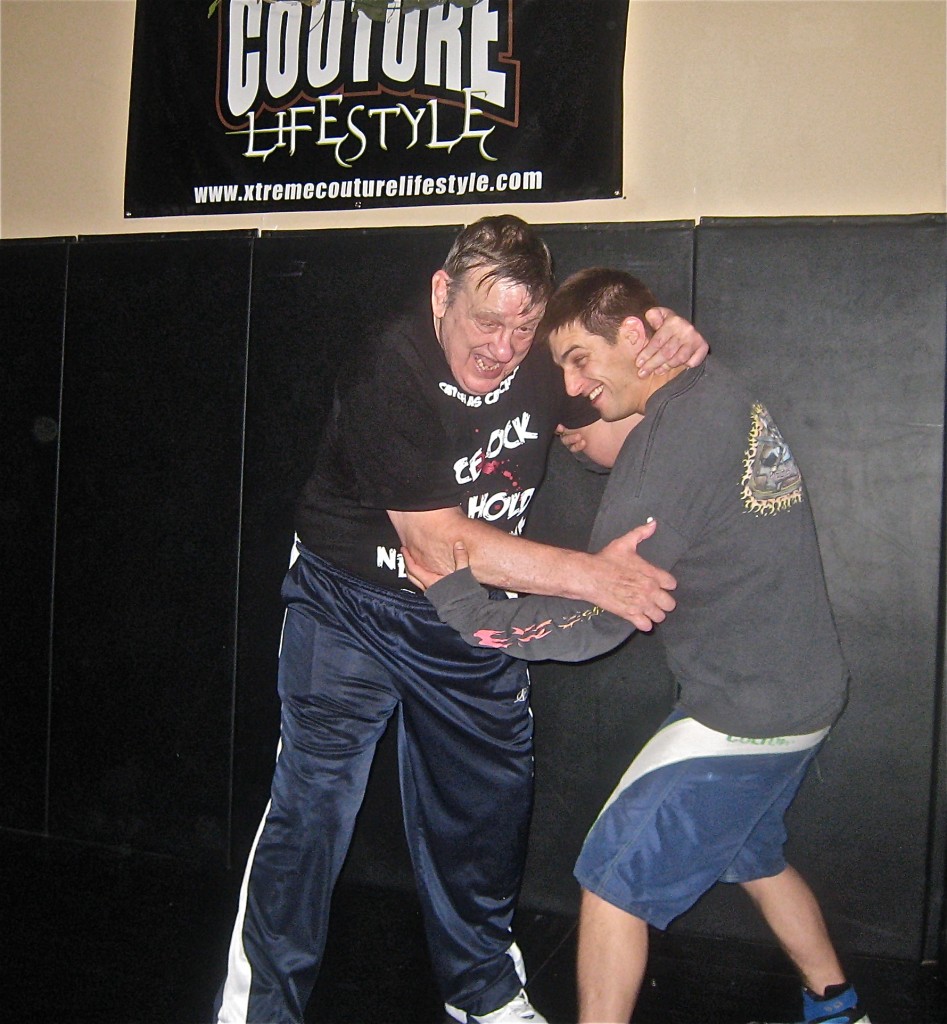 Here is a the short story of how I came upon Catch Wrestling and Billy Robinson. As a grappler, “Catch as Catch Can Wrestling,”  has always been an intriguing and peculiar part of wrestling history to me. Prior to meeting Billy Robinson my impression of Catch as Catch Can was not very good. I had read the original Farmer Burns Mail Order Course “Lessons in Wrestling and Physical Culture,” and several other old books and articles. While all of them are very interesting reads it is impossible to really learn Catch Wrestling just based on photographs, the corresponding descriptions and text captions in these sources.  I also came across several self proclaimed gurus of Catch Wrestling on the Internet. What I saw from them looked like a goofy blend of collegiate wrestling with poorly done submissions. At that point I had written off Catch as Catch Can Wrestling as just being some extinct and antiquated style of grappling.

One of my blue belts went to a Catch as Catch Can Wrestling camp through Scientific Wrestling with Billy Robinson. Billy Robinson is a legendary Catch Wrestler who learned the sport from Bill Riley at the famed Snake Pit gym in Wigam England. The late Karl Gotch (known in Japan as the “God of Wrestling”) is probably one of the most famous  and well known grapplers to have been trained there. Billy Robinson was among one of Karl’s piers along with many other legendary Catch Wrestlers. Robinson is also the man who trained Kazushi Sakuraba and many more world class grapplers. When my blue belt came back from just two days of training with Billy his grappling skills were distinctly improved; he had many new locks, rides and control positions in his arsenal which were brand new to me. Shortly thereafter I decided I would go out to the next Catch Wrestling Camp and train with Billy Robinson myself.

My first day with Billy began with the basics. He went into deep bio-mechanical explanation and analysis of all the fundamental foot work, hip movement and pivoting needed in Wrestling. I was blown away by his expertise, depth of knowledge, understanding of human movement and analysis of technique.

Billy started teaching us take-downs. We covered some take-downs I was familiar with but had never seen executed in such an efficient manner!  He also demonstrated and taught many take-downs less common in wrestling programs today that I had never seen before.

Billy explained to us that the fundamentals of wrestling are now poorly taught compared to the era of Wrestling that Billy came up in. Many of the best throws and classic take-downs used by the old timers have been written off by today’s coaches as being too difficult. It was easy to see the truth in what he was saying, as I had four different wrestling coaches in high school and not one of them ever taught the fundamentals of the pivot as Billy did in just the course of a few hours, let alone an entire high school wrestling season!  Additionally wrestling today has become a complete power sport with shorter and shorter time limits, less time allowed on the mat before a referee stands the competitors back up and increased restrictions on various holds and techniques. In today’s wrestling, emphasis is now placed on single and double leg shots. Interestingly, these are two extremely power based take-downs rarely used in the old days when it wasn’t uncommon for a wrestling match to last several hours.

On the second day we went into the ground work. Again, Billy started out with the fundamental control positions and rides. We learned how to be heavy, how to make it painful, and how to make it extremely uncomfortable for the guy underneath. This offensive study went right into defensive study, and Billy started showing counters and defense to the offensive moves we just went over. Going into escapes. Billy was again pulling out techniques that I had never seen before such as The Short Sit-Out . Finally at the end of the day, we got to submissions! Billy was breaking down the mechanics of leg submissions such as the knee bar, toe holds and ankle locks with more technical precision than any Jiu-Jitsu Black Belt. From there we continued into shoulder locks, neck cranks and more. Most of the goof ball submissions I had seen on the Internet by these the self-proclaimed  “Catch Wrestling Experts” were being shown incorrectly and Billy made sure to straighten everything out. 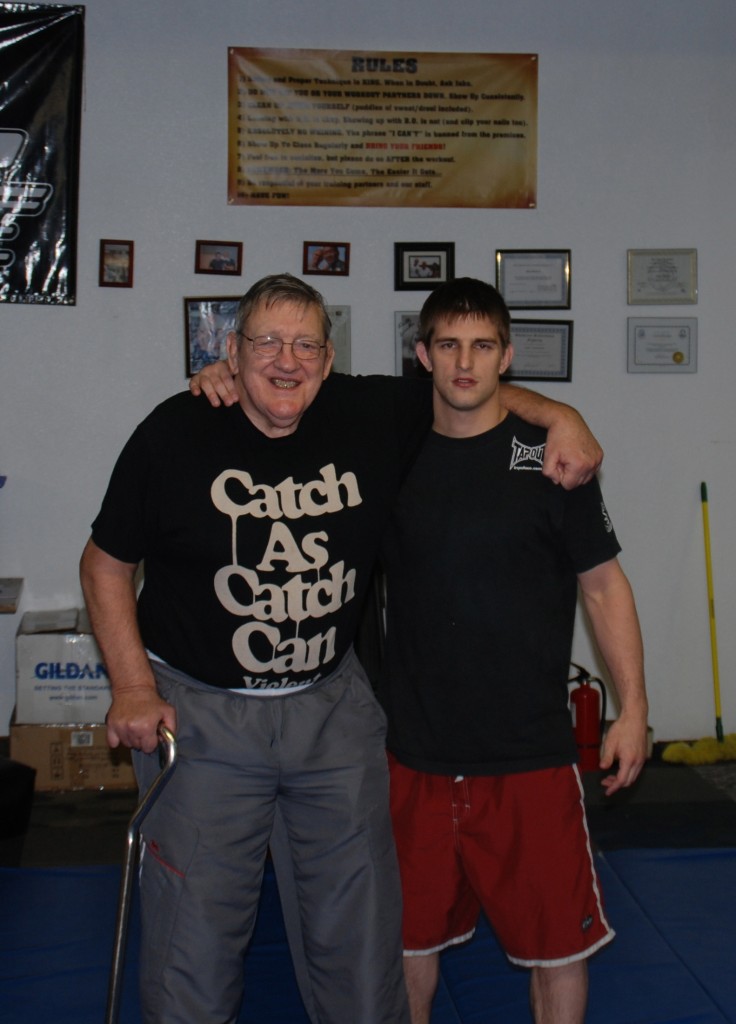 Training with Billy is amazing! At 70 + years old, Billy has had his eye dislodged several times in grappling matches by his opponents, he’s had his pinkey finger snapped, he’s had to wrestle matches lasting as long as 2 1/2 hours at a time, he was the British National Wrestling Champion in 1957, and in 1958 he was the European Open Wrestling Champion in the light heavyweight class. He’s been across the entire world, has done films, movies and more. Today he walks with a cane, has a false knee, has problems with his hips, arthritis in his hands and many other aliments that come with age and a life time in the most brutal sport on the planet during an era when sports medicine was completely non-existent and athletes were treated more as property than people.

What’s truly incredible about Billy is that he is on the mat making corrections and analyzing movement; he has an eye better than anyone for detail. It’s difficult to describe the amazement that comes from the experience of standing there and following his direction as he verbally tells you precisely where to put your hand, foot, weight and sore forth to finally reveal the technique that he is not longer able to physically perform but knows so well. You have to “learn how to learn” is what you’ll hear Billy saying over and over again. And it’s true!  As you slow down, listen, and follow his instruction and coaching you’re given just a small glimpse into the entire world of Catch Wrestling that he knows so well.

P.S. The next Catch Wrestling Camp with Billy will be in Feb 2013 in San Diego California (my own back yard). I will definitely be in attendance both training and doing everything I can to assist with demonstrating technique and coaching. If you haven’t registered yet Register online here.